Choose the appropriate model year for the Peugeot 208 you are trying to find the warning lights for from the list below. 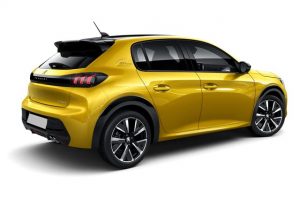 The Peugeot 208 is a supermini class car that was released in 2012. There have been two generations of the 208 at current.

Both of the 208’s generations feature front-engine and front-wheel-drive layouts. They also come in 3- and 5-door variants. Although, the 3-door variant was discontinued in 2018.

The first iteration of the 208 came to market in an attempt to compete with the likes of other superminis due to their rising popularity. Some of the most iconic of the supermini competitors include the hugely successful Ford Fiesta, Mini, and Renault Clio.

The PSA Group sibling, the Citroën C3, also competes with the 208 for sales.

Engines for the first generation of the 208 include a list of petrol and diesel options ranging from 1.0-liter to 1.6-liter. Some of the petrol options were 3-cylinder, while all of the turbodiesels were 4-cylinders.

Like most Peugeots, the 208 has been available in several different trim options, ranging from the Active, through to the GT-Line.

The second generation of the 208 was released in 2019. This featured updated exterior and interior styling, new technology, and PSA Group’s in-house engines.

These engines range from 1.2-liter gasoline with an optional turbocharger to a 1.5-liter BlueHDi diesel.

These drivetrains can also be found in the Opel, or Vauxhall depending on location, Corsa and Peugeot 2008.

The second generation also came with the release of the e-208. The e-208 is an all-electric variant of the 208.

Interestingly, the e-208 features near-identical styling to the combustion version - a rather uncommon sight with EV variations of vehicles.