Choose the appropriate model year for the Citroën C3 you are trying to find the warning lights for from the list below. 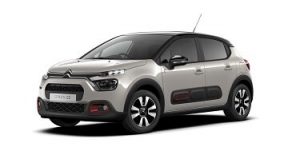 The Citroen C3 is one of many supermini cars that competes in a fiercely contested market within the UK and wider European markets. It was first brought out back in 2002 as a replacement for the popular Citroen Saxo hatchback model. To date, there have been 3 generations of C3, the latest of which arrived in 2016 before being facelifted in 2020.

The first-generation model was fairly eclectic in its offering, including a 5-door hatchback and also the C3 Pluriel, which as a convertible model sold from 2003 to 2010. The more common version, however, was the regular C3 model which was powered by 4-cylinder engines of 1.1L to 1.6L displacement, not to mention 2 diesel options also of 4 cylinders.

As one might expect, since Citroen was part of the PSA group with Peugeot at the time, the Citroen C3 shared many of its components with Peugeot models such as the 1007, 206, and 207 hatchback models. After the merger of PSA with American-Italian FCA, the new corporate entity in charge of Citroen is Stellantis.

Before becoming part of Stellantis, however, PSA created 3 generations of C3, the third of which arrived in 2016 and was facelifted in 2020. The current C3 models are powered by 1.2L gasoline 3-cylinder engines primarily, with 1.5L and 1.6L 4-cylinder diesel options. More than a million third-generation models have been sold to date, proving that the model does have traction, despite heavy criticism aimed at the C3 over the years by prominent critics.

In its current form, the C3 is often best-known for its bright exterior color offerings, many of them two-tone paint jobs. The interior has been updated with many great features, but the main issue as with many supermini models is the amount of room in the rear seats. The C3 is an especially cramped ride for the taller passenger.