Choose the appropriate model year for the Peugeot Expert Tepee you are trying to find the warning lights for from the list below. 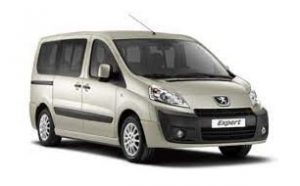 About the Expert Tepee

Before crossovers became “it,” the minivan was seen as the best solution to an efficient and effective family car, especially for those on a budget who couldn’t afford what was then exorbitant SUV running costs. Thus, OEMs everywhere were searching for the ideal minivan design formula, including Peugeot. One such creation was the Peugeot Expert Tepee.

Unlike the Bipper Tepee, the Expert Tepee was a larger model capable of seating up to 9 people in total. It was built to compete with the likes of other large minivan designs, including the Hyundai i800 and the Volkswagen Caravelle. It was offered in a standard wheelbase that could seat up to 6 people, and then the longer wheelbase version that could seat up to 9.

The Peugeot Expert Tepee is powered by 2-liter HDi diesel engine in three main variants that offer up to 161hp at the top end. Its 0 to 60mph time of 18.5 seconds for the 6-seater version, and 20.7 seconds for the 9-seater version, may leave a lot to be desired, but then again people generally didn’t consider a minivan like this for the performance credentials.

With a combined fuel efficiency of about 35.8mpg (43mpg in UK measures), even these larger vans were fuel-efficient, a quality people also admired about their smaller sibling the Bipper Tepee. Where things really get practical is in the more than 37 cubic feet of cargo space that you get with all the seats up, going up to almost double that when you lower the rear seats.

The interior wasn’t luxurious like that of something more upscale such as the Mercedes-Benz V-Class, but it remains a large, practical, and affordable large-scale minivan solution for those who need the space but don’t need all the frills.