Choose the appropriate model year for the Audi Q5 you are trying to find the warning lights for from the list below. 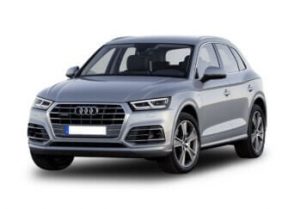 Audi’s range of SUVs and crossovers have become a hugely popular and sought-after model type that even rivals its longstanding and iconic sedan series. The Audi Q5 is a compact luxury crossover, production of which launched in 2008 in time for the 2009 model year.

There are currently 2 generations of Q5 models, the first of which ran from 2008 to 2017, with a major facelift released in 2012. The current range was released in 2017, with updates including a long-wheelbase version in 2018, and a facelifted version released in 2021.

In its current form, the Q5 comes in a large range of trim levels, starting with the Premium 40 which starts at $44,495, and going all the way up to the Prestige 55 PHEV (plug-in hybrid) which starts at $65,145. The gasoline models in particular represent decent value in the luxury crossover market.

The current powertrain lineup includes a standard 4-cylinder unit with a turbocharger delivering up to 201-hp. If you purchase the higher-end 45 powertrain, you can get a boost to 261-hp. Fastest in the lineup is the PHEV variant which gets a 4.5-second time from 0-60 compared to 5.5 seconds on the regular 45 powertrain.

The interior is spacious for 4 adults, as well as quiet and comfortable on the road. Cargo space at 25.85 cubic feet is a bit disappointing where the BMW X3 gets more than 28, and the Jaguar F-Pace more than 31 cubic feet as standard. Upgrading to a Premium Plus or Prestige trim gets you the Audi Virtual Cockpit, but all of them are made with high-quality materials.

A facelift in 2021 provided more advanced Generation 3 Audi infotainment tech, as well as a new grille, side intake design, and revamped rear trim, side sill and bumper side. Two new exterior colors were added to the list, namely Ultra Blue and District Green.