Choose the appropriate model year for the Mazda MPV you are trying to find the warning lights for from the list below.

A people carrier designed in the 1980s and released for the 1988 model year, the Mazda MPV proved a massive hit for the 28 years it was built.

The range was massively popular but in an attempt to move forward with the market Mazda moved their attention to 2 other lines: the CX-9 and Mazda5.

The minivan was designed for the huge American market to take on domestic manufacturers such as GMC and Dodge.

What set the original Mazda MPV apart from a lot of the other minivan people carrier-type cars was its focus on off-road technology.

As the generations moved forward with time the car steered away from the off-road features that were falling out of favor in the market and focused on comfort.

The car also moved away from heavy uneconomical engines and offered lower-cost platforms that were more family-friendly.

Transmission choices for this nameplate have always been limited to just 1 automatic option that shows just how focused on the North American market the manufacturer was. 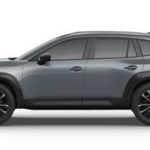