Choose the appropriate model year for the Buick Encore you are trying to find the warning lights for from the list below. 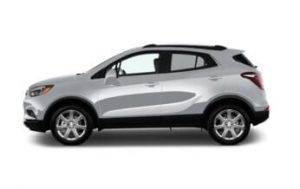 The Buick Encore is a subcompact cross-over SUV made by General Motors. This was Buick's first subcompact crossover SUV and their fourth SUV brought to market, the first three were the Rendezvous, Rainier and the Enclave.

The first generation began sales in 2013 as the North America version of the Opel Mokka. The nameplate Encore had been used before by the American Motor Corporation (AMC) for their subcompact two and four-door hatchback.

This Encore was unveiled at the Northern American International Auto Show in Detroit on January 10th, 2012 with both a front-wheel drive and rear-wheel drive option. Between 2013 and 2015, the trim levels available were Base, Convenience, Leather and premium. All had 1.4-liter multi-port fuel injected engines producing 138 horsepower with a six-speed automatic transmission.

In 2016, Buick brought out a Sport Touring Encore which was noticeably different to the more basic models. The Touring Encore had 18-inch wheels, a rear spoiler, body-colored door handles, remote start and fog lamps.

Eventually, all models were given stop/start technology and Buick decided to rebrand some of the trim levels, making; the Sport Touring, Preferred II, base, Preferred, Essence and Premium. In 2017, Buick give the Encore a facelift to include new headlights and newly styled bumpers. There were differences internally too, namely a new 4.2-inch dash screen and rear infotainment system.

2020 saw the introduction of the Buick Encore GX which eventually saw off most of the other trim levels so that just two models remained, the Encore, and the Encore GX, all had a jet black interior and customization was kept to a minimum.

The decision was made to terminate the original Encore line and just keep the GX, making the GX Buicks new entry-level SUV. It’s evident in the annual sales why this decision was made, the Encore had a very short but successful run, moving from 102,402 units sold in the USA in 2019 down to just 20,072 units in 2021.