Choose the appropriate model year for the Buick Enclave you are trying to find the warning lights for from the list below. 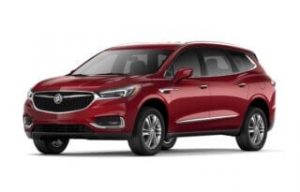 The Buick Enclave is a crossover SUV with three rows of seating manufactured by General Motors since 2007. Buick showcased the Enclave at the Northern America International Auto Show as a concept car which was loosely based o the Centime concept car (2003 Detroit Auto Show). The Enclave replaced both of Buicks previous SUVs, the Rendezvous minivan and the truck-like Rainier. In 2014 it achieved the award for the most affordable midsize SUV.

The first generation debuted in 2008 and proved very popular amongst large families, the three-row seating allowed for 7 passengers and Buick allowed a second option, to remove the two seats along the back row and replace them with a bench seat to make room for 8 passengers.

All models came with front-wheel drive as standard with the ability to upgrade to all-wheel drive. A standard 3.6-liter V6 engine with 6-speed automatic transmission was fitted to all models with an upgraded 3.6-liter V6 spark Ignition direct-injection engine entering the market in 2009.

The Enclave was praised for its ability to carry large cargo whilst maintaining a unibody, making it drive more like a car than a truck. The Enclave is officially one of the quietest vehicles of its type in Northern America and enjoyed good sales upon its initial release. 2013 saw a new facelift with a sleeker exterior and new grille.

The second generation was released exactly ten years after the first and was showcased again at the Northern America International Auto Show. Its quality interior put it in direct competition with Volvo’s XC90, Infiniti QX60 and the Acura MDX. Buick kept the 3.6-liter engine but added a 9-speed transmission instead of 6. Three trims were available, including the top-level sub-branded Avenir.