Choose the appropriate model year for the Jaguar XF you are trying to find the warning lights for from the list below. 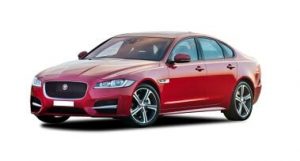 The Jaguar XF is a luxury sports sedan that was originally released in 2007. It was released with the intention to replace the now discontinued S-Type. The first generation was titled the X250.

Since its release, there have been 4-door sedan versions, as well as a 5-door estate wagon. These include the XF Sportbrake and the XFR-S, a powerful performance sedan.

The XF rivals other luxury sedans, mainly the Audi A6, BMW 5 Series, and Mercedes-Benz E-Class. The Sportbrake version also goes against the estate offerings from the German manufacturers, as well as the likes of the Cadillac CTS wagon.

There have been different layout options available, featuring front-mounted engines with either rear-wheel drive or all-wheel drive.

Engine options for the XF have ranged hugely, like most of the Jaguar models that have been on the lineup for many years.

Petrol engines started with a modest 2-liter turbocharged Ford EcoBoost and went through to the fiery 5-liter supercharged V8 found in the XFR-S.

Diesel offerings consisted of a series of Ford engines, being the 2.2-liter Duratorq, and a 2.7-liter and 3-liter V6. All diesel options came with a standard turbocharger.

The X250 received a facelift in 2011, which included the addition of adaptive cruise control, new engine options, and styling changes.

The second generation of the XF, the X260, was released in 2015 with a series of changes to the original X250. One of the biggest changes was moving from the original steel body to aluminum bodywork.

The engine options for the X60 include 2.0 L inline-4 and 3.0 L V6 petrol or diesel engines. The larger of the petrol engines were fitted with a supercharger, while both types of diesel were turbocharged.