Choose the appropriate model year for the Mercedes Benz CL-Class you are trying to find the warning lights for from the list below. 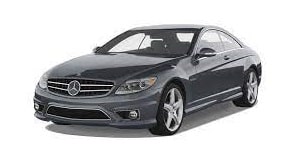 Making up a line of tourers, the Mercedes-Benz CL-Class was sold between the years 1992 and 2014. ‘CL’ stands for ‘coupe leicht’ or ‘coupe light’ for the English speaking. Introduced as Mercedes premier model, it takes its inspiration from the S-Class saloon and subsequently was built upon the same platform.

A modern-looking car for the time, the CL-Class was both sleek and angular, and, designed by Bruno Sacco, it had a M119 5-liter V8 engine (which was considered one of the best engines created by Mercedes by numerous reviews).

The extremely rare 2000 CL 55 AMG F1 edition was created as a tribute to the safety cars used in formula one, these production vehicles demanded a high price and elevated the CL-Class even further.

From 2006, the third generation went into production, this car had a sharp sloping back and, aggressive styling and a fully aerodynamic design. An interesting technical installation was Mercedes’ inbuilt pre-set distance to keep the vehicle a safe distance from the car in front automatically.