Choose the appropriate model year for the smart fortwo you are trying to find the warning lights for from the list below. 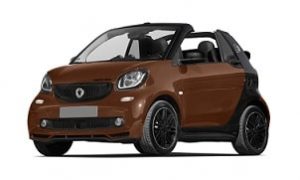 About the smart fortwo

Built as a rear engine 2 passenger vehicle, the Smart ForTwo is classed as a hatchback ultra mini. The Smart Automobile Co. Ltd is a company that has enjoyed input from a number of leading car (and watch) manufacturers.

As strange as it may sound, these little ‘For’ Series cars (ForTwo and ForFour) took a design lead from the Swiss company Swatch and Mercedes Benz. Arguably a revolutionary concept, the Smart ForTwo debuted in 1998 and was a mere 2.5 m in length.

Marketed to predominantly City drivers, these little cars could maneuver easily about the streets and sneak into tight parking spots, in some cases head-on! In later generations, the passenger seat was situated 15 cm further back from the drivers, just to allow for further cabin space and the illusion of a wider vehicle. Made at Smartville Daimler Assembly Plant in Hambach, France, the ForTwo could be purchased as both a coupe and a cabriolet, with a long canvas roof folding concertina style into the boot.

For a small car, it only required a small engine, and so the first vehicles were created with just a 599 cc petrol engine with a 45 brake horsepower capability (with the option to increase this to 51 or 61 bhp). Four years later, a 698 cc engine was introduced along with the new facelift and a new turbo diesel had an additional 100 cc. With arguably unimaginative names (the City-Coupe and the City-Cabriolet), the ForTwo had a number of trim levels, Trim-Pure, Pulse and Passion. These variations were fairly basic, with only a bare-boned audio system installed as standard; the higher-end vehicles added alloy wheels, panoramic glass roofs, paddle shift gears, air conditioning and a sequential gearbox.

The second generation began sales in 2007, these were a good 200 mm larger due to the installation of new safety gear in a bid to achieve a greater score in crash tests. Aesthetically, the ForTwo remained largely unchanged but there were a number of new features created for this new release, namely stop-start technology, a belt-driven starter generator, side airbags, antilock brakes and electric stability control.